Ho ho ho here I am in chi chi chic Coal Yard London, so hipsterly couture you need fingerless hands in your fingerless mittens to fit in. It is so shallowly pointlessly hard-stoop erstatz inspired it gently appalls. My father owns the sheep on a thousand hills and as regards the rest, well I lived in real designer land for 30 years, so for me their fabulous Tomorrowland is so passé. This place is gentrified to the point of desertification. The Kingdom of Heaven on the other hand, is the real thing, whereas this place is just the sad worldly imitation.

Here is another “episode” of Disappearing Cambridge, again in Mill Road – place of my birth. In a private courtyard at the end of the road near the centre of town, just about opposite the swimming pool, there were two mosaics. Sadly one is almost completely worn away and the other is in a very poor state. Given the condition of this art I think it will not be there much longer. They were commissioned from a world-renowned specialist mosaic artist in 2004. I can find no photograph of them in original condition online. Here they are as of now, sadly. Based on the one still visible, I think they had real class. 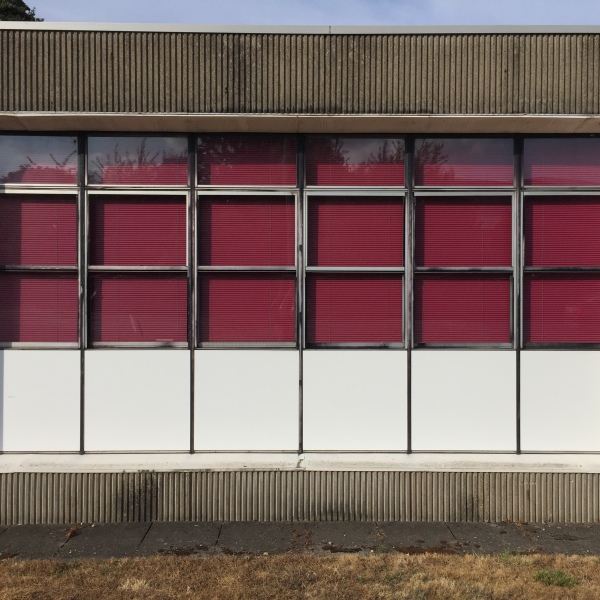 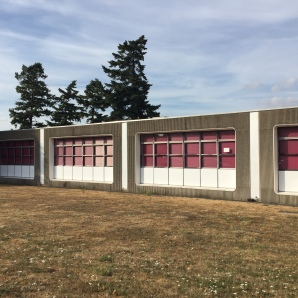 The N2S building at the junction of Newmarket Road and Western Way in Bury St.Edmunds is an occupied building, and one must assume very well-protected security-wise. It looks like it’s 1960’s construction and probably has all the 60’s problems that one would expect, including being riddled with Asbestos – unless it has been removed. It’s the sort of place that may well not be listed and that one can easily envisage suddenly disappearing, so I’ve snapped some pictures now, just in case it’s gone suddenly one day when I next pass there.

I seem to recall that the red venetian blinds have always been part of the building, that I have passed by numerous times over the last 50 or so years, and that they have faded over the decades. As they were almost certainly bespoke and costly to replace, I imagine my memory of this may well be correct. The visual effect, unintentionally, has always been to make the place look like a fire station with big red doors for the engines.

I wonder when exactly it was built, what was it’s original purpose, and of course who were the architects. I really like this building. I think it has bags of character and looks like a very “Gerry Anderson” kind of film-set. If anyone knows more about this building please do contact me via the comments facility. 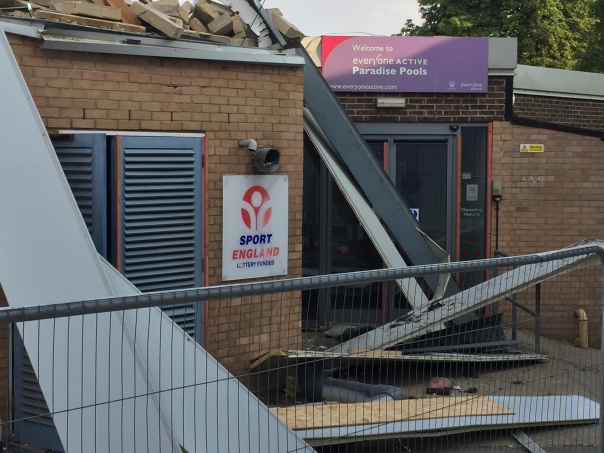 I was baptised in this municipal swimming pool less than 5 a years ago, along with some other people that day, who I will always think of as my Baptismal brothers and sisters, so it has a special association for me.  No, I don’t put my face online, you won’t need it.  Just a little bit sad seeing the pool go. 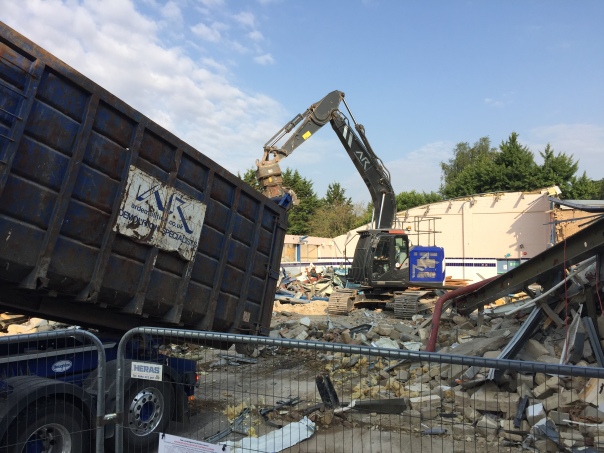 Started around 2009 on donated land, built in English vernacular wooden-frame style (Tudor!) wholly hand-made from New Forest hand-picked individually felled 150-200 year old Oak trees, without officially any architect, all designed by volunteer master carpenters. Everything is hand made bespoke. Basically only some sanitary-ware and second fixings are proprietary.

It is  about three to four stories high with double and treble hammer-beam almost gothic roofing. It is HUGE. The car park is gigantic. There are many large classrooms (enough that it could be school), 2 huge refrectories (eating rooms) and a full size commercial kitchen. There is of course a baptismal pool. There is room after stunning room, balconies, a courtyard, cloisters and minstrel galleries. All wired CAT6 for ITC. Check out the herringbone brickwork. This is Hampton Court (Royal Palace) level work, just a half-century later!

The price is so low due to donations and volunteer work that my Quantity Surveyor friends cannot believe it is so far only £3m. This is about as incredible as the mosque I am working on and about the same size, but around order of magnitude less cost. Wow!

Enjoy a few pictures. Remember all is hand-made bespoke. 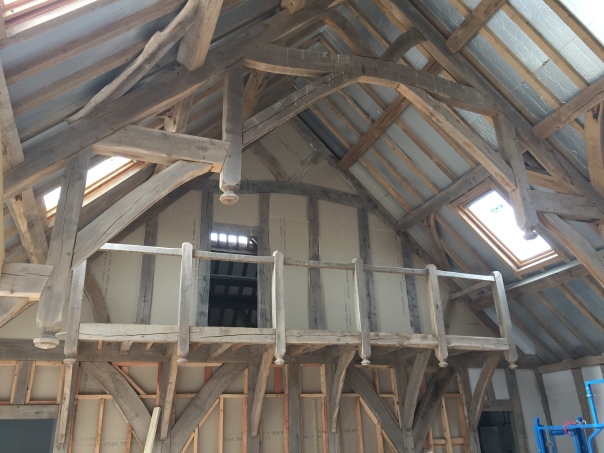 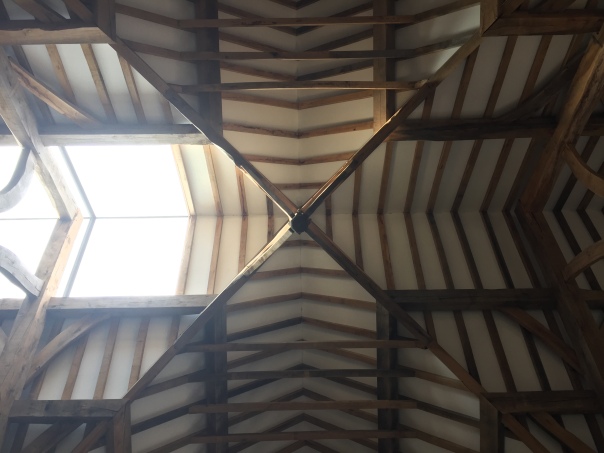 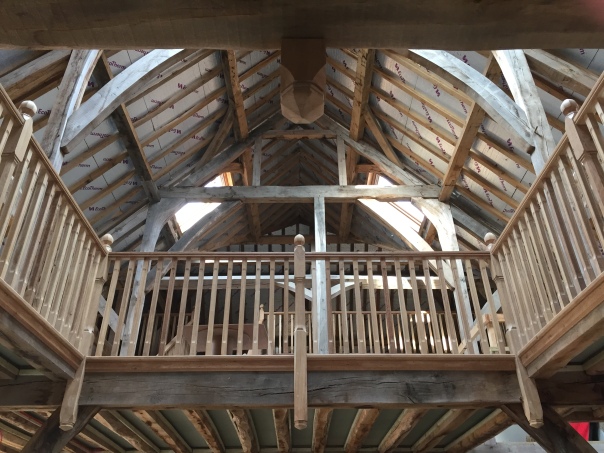 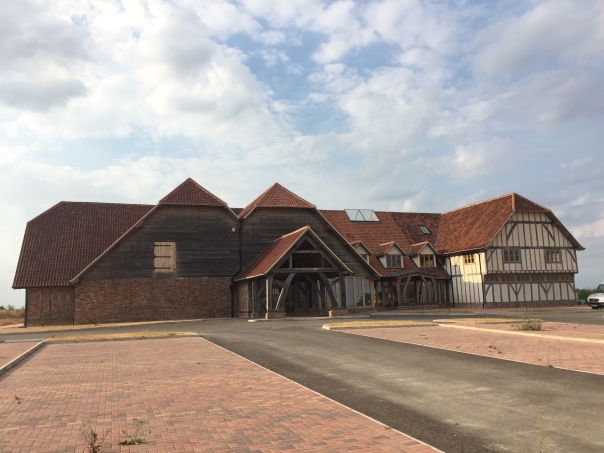 All photography in this article is my own Copyright©2018 kevintangodance not to be used without my prior permission.

“Trollbeads” the very idiosyncratic jewellery (faux) Art Nouveau-fronted shop is no longer there. Perhaps the lovely shop front will be retained if the unit can be let, although the number of empty shops even in prosperous Cambridge centre is now quite scary – feels like 5%. It is true that Main Street / The High Street shopping is dying as clicks overtake bricks – sad and horrible, because “going shopping” is something fun to do even if one is only “window shopping.” Therein of course lies the problem.

I was born in Mill Road, Cambridge UK. I remember Mum taking me to buy clothes at Barneys shop when I was a boy about 50 years ago. It closed down some years ago, but recently they stripped it back to the concrete, and there is the outline of the old sign still there over the entrance. The Penguin “American” Laundry still there, has been running as long as I can remember.

If you are an old Cantabrigian like me, enjoy.

These appear to be four old runway (reflector?) signs. They are along the road at the point where Rochford Road becomes Southend Road (the A1169) beside the railway bridge at Southend Airport (in the county of Essex, UK) – Latitude 51.5668, Longitude 0.7041 – over which I think the southern end of the old cross-runway (no longer used) was approached by aircraft.

I don’t know but guess they either date from 1935 when the airfield become a civilian airport, or after World War II which would mean after 1945. I favour the former as they look very old. They could be any time from 1914 when the airfield was first established by the military shortly after the beginning of World War I. In 1919 the airfield was sold off to the Navarro Aviation Company who ran pleasure flights with two old Avro biplanes – apparently not for long however as the airfield was disused from 1920 to 1935, having reverted to farmland.

Perhaps they would not have had such obvious signs during World War II as airfields were camouflaged and signs removed, which would favour them being post-WWII, but they might be older – 1935? – and have been removed during WWII then replaced.

Of course the airfield was used as a fighter base during WWII but after that, in 1946, Southend Corporation took it on as an airport which they opened in 1947. There was major re-building including a control tower and runways in 1955. Perhaps the posts date from 1955, but to my eyes they look too old for that. Although maybe the pairs of red beacon lights went on in 1955.

Some paired red lights were stuck on to of them at some stage, these are also now defunct. They were also apparently used to mount streetlights. I don’t know if these lights still function, possibly not.

Wikipedia has a great page about the airport, including its history here https://en.wikipedia.org/wiki/London_Southend_Airport

Another good source was at
http://www.essexlifemag.co.uk/out-about/places/london-southend-airport-80-years-on-1-3779112

My best guess is these posts originate around 1935. They could have been actually erected between 1933 when the airport site was purchased by Southend Council and when it opened in 1935.

Whilst I do not find Essex and Southend the nicest places in the UK, I will put in a good word for Rochford. What a lovely village (although it is really now a suburb of Southend) – olde-world shops, buildings, pubs. Good parking. Southend Airport also looked nice, which is pretty weird for an airport. Apparently it has in recent years been voted best Airport in the UK three times and it has a dedicated railway station. I think I would like Southend as an airport and Rochford is worth a visit if you are in that neck of the woods. 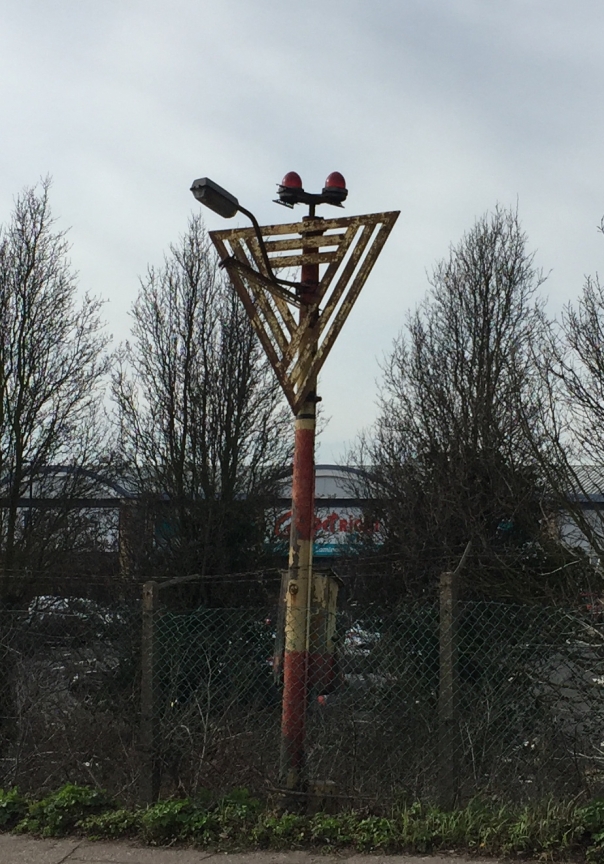 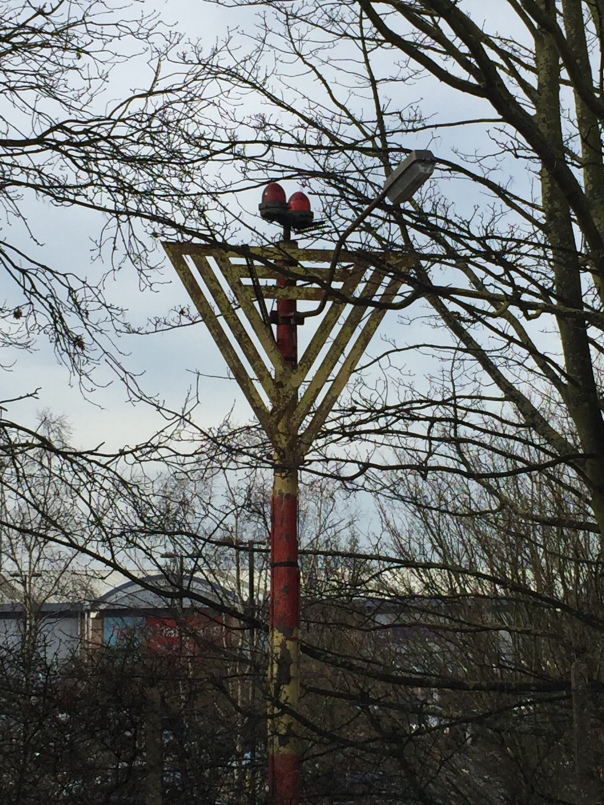 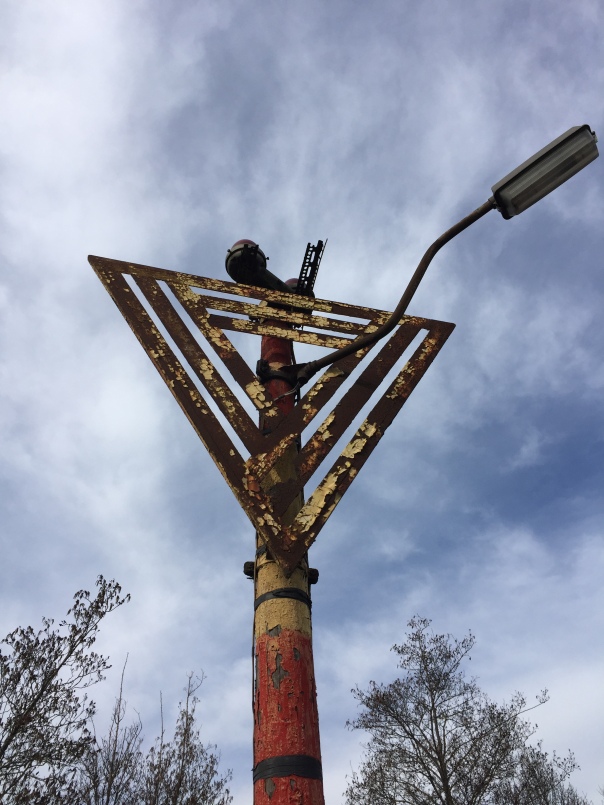 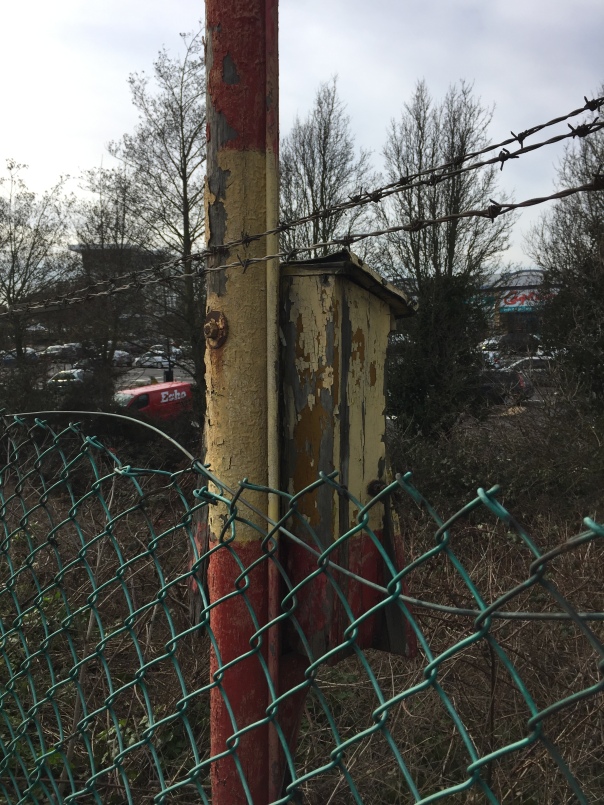 There have been number of cinemas in Leicester called Odeon, indeed there is still one. However the one I spotted has not played a movie in a very long while, and it has certainly seen better days. There have been various plans for this old cinema, which have not yet come to fruition. Here was one such plan from Studio Four Architects https://studiofourarchitects.com/odeon-arcade-leicester/

It was very hard to get an angle to include the frontage. There is something I like about this old building. I don’t much like the plans Studio Four had for it. Maybe the rendering on their website is just a low-res model, but if losing the windows and surface textures of the building is what Studio Four really had in mind, then no. They do say “whilst preserving a traditional façade on one side of the development” so hard to tell really. I think the detail on that façade is all the building has left now. The interior at ground level is long gone. What is upstairs I could not get access to. Perhaps there are former glories still inside up there, perhaps not – I could not tell. An estate agent (realtor) website says “The property comprises a retail arcade with former Odeon cinema above set over basement and 5 floors.” On another site here http://www.auction.co.uk/residential/data/full_text/may2017/pos231.pdf
there are clues that there perhaps is still a cinema upstairs.

A cinema history website at https://www.foxestalk.co.uk/topic/104842-leicesters-40-lost-cinemas-do-you-remember-any-of-these/ says: “Odeon Cinema, Marketplace –  This started off life in 1924 as the City Cinema, with The Covered Wagon the first film to be screen there. It had 2,200 seats in stalls and circle, an Apollo organ and also a cafe. But it was closed in April 1964 and the auditorium was demolished. Six months later a new cinema was built behind the original facade. The ground floor was the shopping arcade that you can still visit today, and the cinema was the on the first floor. It was notable for its 70mm presentations on the curved screen which measured 45ft wide by 26ft high. It became a ‘roadshow’ cinema, a term used by the film industry for cinemas where films opened in a limited number of cities for a limited time before they went on national release. And the The Sound of Music had a two year run at the cinema. But on May 31, 1975, the cinema closed. It then briefly became an independent movie house called the Liberty Cinema which screened Bollywood films. Since then, it has been used as a bingo club, amusement arcade and a music venue.”