I was interested to look at pictures of the recent tragic bridge collapse. Here are what it seems to me may be of significance and some questions to be answered. First lets look at what is where before it happened.

This photo is before the collapse taken from the side on which the central reservation chevrons face away from the camera on both sides of the bridge, which at this stage is still being moved into position. Note that in the central highway lane on the side of the highway that has lighting poles along the outer margin, there is no crane where I have arrowed down. Along the top of the bridge there are various areas where apparently bolts go through the roof to the upper side. I have circled a couple of these areas. These bolts presumably hold the supporting diagonal braces in position. It appears as if the tension and compression forces in the supporting diagonal braces are either compression or tension and may be directed as per the arrows I have drawn on them, I say appears, I am not an engineer.

You can check out in the view above  that there is no crane of the side of the bridge on the side to which the central reservation chevrons point. There is some sort of yellow/orange crane boom arm just visible on the opposite side in the top left corner of the photo, but no crane on the right. The bridge is being rolled into position above the main reinforced concrete legs. 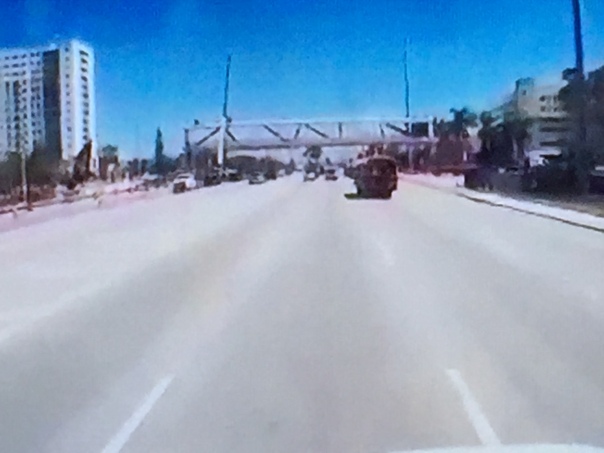 Now look at the still approaching from the side to which the chevrons point, immediately before the collapse. On the left of the still you see the white boom arm of a crane. It was not there when the earlier pictures were taken during the positioning of the bridge onto its legs, and the white boom arm is different to the small area of yellow/orange arm pictured earlier standing on the opposite side to the crane that is shown on the immediately preceeding collapse image above.

Here above we see the white boom arm crane closer, immediately before the collapse. See it is doing something on the roof of the bridge, near those important bolts.

Now above we are maybe less than one second away from the collapse. Is that a guy up there  at the hook end of the crane on the roof doing something? It looks like there is something large and so possibly heavy on the end of the lifting cable.

Now above the moment of collapse. Whatever the crane was holding swings violently as the bridge beneath it collapses. Below, is that a man falling?

Below, a frame later, what/whoever is falling has fallen down further in relation to the boom arm. The person or object is definitely lower and so is falling. 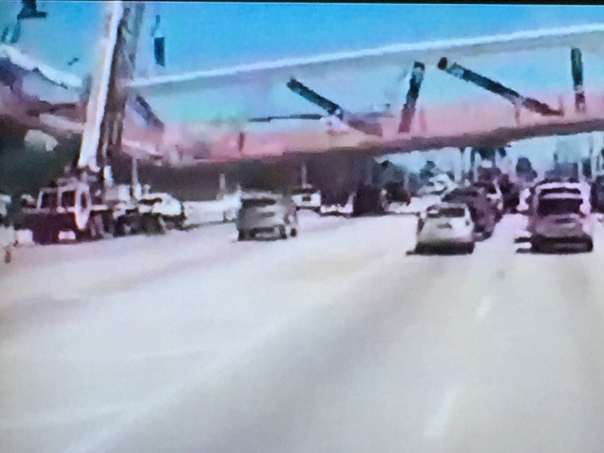 Above you can see finally dangling, whatever is left of something large on the end of that crane hook. It is as wide as the supporting diagonal inside the bridge. Maybe quite heavy then. See the chevrons by the way?

So, below now we are after the collapse. There is no sign anywhere of the crane with the white boom arm. There is a green mobile elevating work platform which was not there during the collapse.

Here are my questions:

What was the white boom arm crane doing?

Did someone fall with the roof from on top where the crane was working during the collapse?

Why has the white boom arm crane been removed, surely this is vital evidence and needs to be left in place for forensic investigation?

Did the directions of forces transmitted in the strangely asymmetrically braced bridge design have any bearing on the collapse?

And of course there is that phone call voicemail about cracks from the engineer that wasn’t collected until the day after the collapse. But please don’t let that be the main question, because as I show above, there are other questions also.